Adam glanced over at the platform, saw the curly red-haired girl tying her shoelaces.  She smiled at him.  He smiled back, then took a picture of his two sons screaming with laughter as they swung higher, higher.  He glanced at the girl again.
Her two little shoes standing together, alone.
Hands shaking, Adam raised his camera.
“Whatcha doin, hon?” his wife asked.
“I saw something impossible,” he said.  “I swear there was a little girl who…”
And there she was again.  She smiled at him a second time, and winked.
“Disappeared,” he said.

The sound and fury of finals are over, and I return to the somewhat less stressful world of fiction.  Anyway…Every Friday, writers from all around the world write 100 word (or thereabouts) flash fiction based on a photo posted that Wednesday on Rochelle Wisoff-Fields’ blog.

I welcome constructive criticism; without it I cannot grow as a writer.  The weekly photo that inspired this story is below: 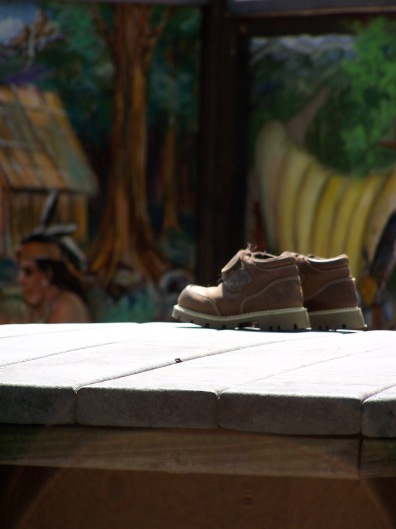 The word "glossarch" doesn't exist. At least, not yet. But let's pretend it does for a second. The first part is "gloss," a word that comes to us from Ancient Greek via Latin and English. It means "language." The second part also comes from Ancient Greek and can mean "having power over." So "glossarch" means simply "language controller." So what am I doing making up words? Well, I made up an entire language once. It's called Angosey. So I'm the Glossarch of Angosey. I'm currently a doctorate student in volcano seismology (a branch of geophysics). I enjoy writing fiction and poetry, launching balloons, programming, and hanging out with my lovely wife! Follow me on Twitter! Writing and language creation: @glossarch Balloons and science: @bovineaerospace
View all posts by glossarch →
This entry was posted in Friday Fictioneers and tagged Friday Fictioneers. Bookmark the permalink.